One afternoon in March 2019, I was taking time out from the Glass Hack , a four day glass art and science symposium in Småland, Sweden, by taking a walk through the surrounding forest; stretching my legs and exploring, satisfying and initiating my curiosity for this sparsely populated forest landscape.

I felt a deep resonance with the moss and lichen strewn trees and granite boulders that extended in every direction as evening closed in. As the impending darkness drew in toward me I felt a disquiet, a sense of unease that this landscape was bigger and more powerful than me with hidden dangers that so easily play on the imagination.

Despite my discomfort, even fear, I felt deeply drawn to this landscape and its inhabitants, both human and non-human. This synergy between my own inner world and the outer environment fascinated me.

Deep in the woods I came to an abandoned farmstead. A traditional wood-built house and barn in an overgrown garden. In the growing gloom there appeared to be spectral traces of people long gone. Unnerved, I turned back with a sense of a presence not present.

Boda Glasbruk is a small village surrounding The Glass Factory, a former industrial glass production centre in Småland, Southern Sweden, now turned into a museum and contemporary glass venue. I was there to give a talk on the synergies and crossovers between archaeology and art in my practices. This was part of the Glass Hack a project that sought to engage artists and scientists in collaborations of creative research and application. Artists and scientists from around the world converged on The Glass Factory, both in person and remotely through the internet, for four days of practice in the hotshop, lectures and the general sharing of ideas.

The sense of darkness that I felt on that walk, formed the beginning of this project, Touching Darkness.

At the end of the symposium, I was asked to return to do a project about the changing landscape of this region, known as the Kingdom of Crystal for the plethora of industrial glass factories set in the expansive forests of Småland. These factories provided skilled craftsmen and women with employment and formed the backbone of a lively rural community since the 18th century. This society and the cultural landscape it inhabits is now under threat as all of these factories ceased production at the beginning of the 21st century due to the economic pressures of globalisation.

In the resulting residency I proceeded to investigate the transition from industrial base to a post-industrial landscape, examining the resulting rural depopulation in the form of abandoned homes in the village and its surroundings.

I took the theory of deep mapping as my starting point, mapping out the landscape and my experiences of it through drawing, cartography, photogrammetry and conventional black and white photography.

Nothing I encountered was left out of the project, including the gathering, excavation and manipulation of artefacts, and the acquisition of 19th century cast-iron press-molds, used subsequently to make new glass and installation pieces in the resulting exhibition.

In the field, I identified 8 houses. All bar one of which were unoccupied. This afforded me the opportunity to investigate the processes of abandonment and decay that occur at the end of a building’s life, from the last occupant to almost completely destroyed, when the site becomes something more like what might be thought of as a conventional archaeological site. Further research is ongoing at the moment as I write up the project. 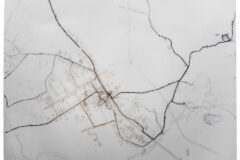 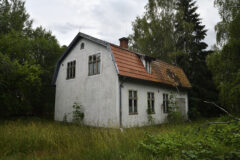 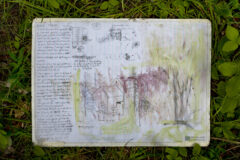 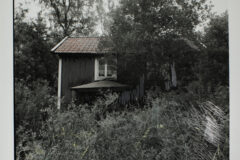 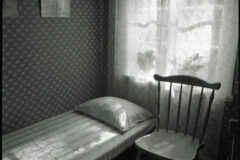 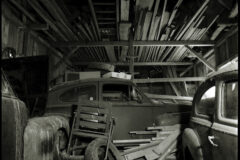 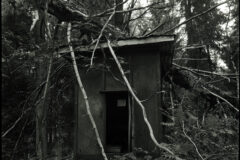 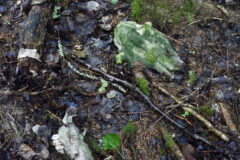 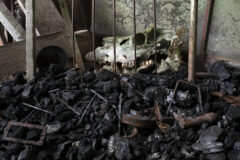 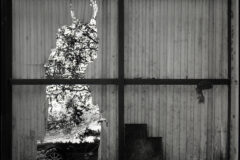 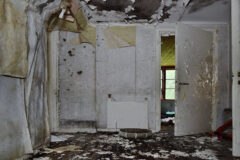 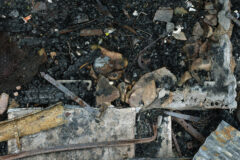 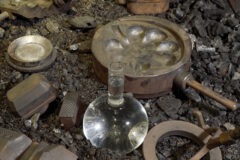 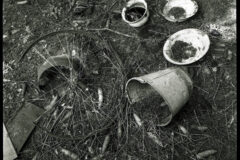 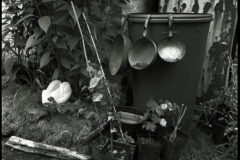 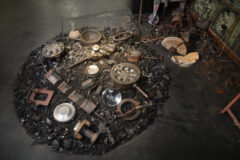 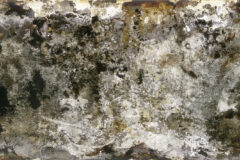 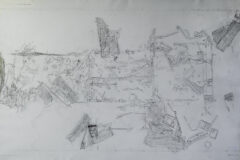 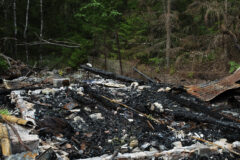 The results were collated into the exhibition Touching Darkness, shown in The Glass Factory in September of 2019. The blog written during the residency can be found here and an online map of the sites here.