Arriving on site after an overnight ferry crossing, we found ourselves in Drefelin, Carmarthenshire in West Wales at the mill turned contemporary arts space Melin Glonc. We were greeted by a smiling Roger and Mari, our hosts at Art Camp, an arts initiative where guests come to experiment, to try out ideas and meet like-minded practitioners. For a long time I have wanted to experiment with excavation as an art practice as much as a method of archaeological investigation, and this was an opportunity to do so. I wanted to hybridise the different methodologies and techniques to find new ways of interpreting space. I was asking a few questions of myself, such as; what would happen if I did an excavation without the rigour to record empirically that archaeology needs? What more might be found in the process? Can the craft of archaeology be used for art? What can the methodologies of art bring to archaeology? Big questions that this small experiment cannot truly answer, but by doing, making and un-making, this process was explored and contemplated.

Not just rain but heavy persistent, constant rain that only varied in its intensity. The only blessing was that there was virtually no wind. Despite this we got started. Dressed to the nines in waterproofs and wellies we cleared the vegetation [C 1] and started into the topsoil. It was surprising how the desire to get started overcame conditions that most archaeologists wouldn’t work in, even in commercial excavations.

This posting will outline some of the results and subsequent thoughts, also some of the dilemmas I encountered on the way. This project was certainly process oriented, not a search for finished works but led by actions, primarily excavating a small test trench and dealing with whatever was found or encountered along the way into the soil. There was also a post-excavation phase, an interpretation of some of the artefacts retrieved, some identification of specimens encountered in [C1] and elsewhere.

There were no expectations. Roger’s concept with Art Camp is to provide a space for experimentation without the need for outcomes. His aim was to facilitate, to allow practitioners the much needed space to try things out without any pressure, so this was an ideal opportunity to simply have a go at excavating in a different way. To undertake some serious play.

I allowed Roger to determine where the excavation was to be, both from a perspective of the overall impact it would have on the site and what his local knowledge as the owner of the mill might indicate. Strangely, for an archaeologist, I was not interested this time in what I might find, in what historical knowledge might of been gleaned from an excavation. My interest lay in the materiality of the site and in the physicality of excavating by hand as a performative act. The site Roger steered me toward was in a small triangle of land between a wall, the road outside the mill and one of the mill races, a stream running from the mill pond back to the main river. Roger knew this used to be the site of an outhouse for the mill (The mill has 16th century origins). He wondered if I might be able to determine what it was used for and if I might be able to find any remains of the building. I knew from the start that the chances of doing this were slim, as I only had a four-day period and was mostly working alone. Roger was also hopeful that I might encounter some local passers by, who might well be intrigued by my efforts. On the second day, one of Roger’s neighbours did come over to show me a picture of the building that used to be where I was digging, in book about local history. We had a chance to discuss my experiment and look at some of my finds. I wish I had a photograph of them with the book, if I was doing this again I would bear this in mind. This experiment was a chance to try out my ideas about the craft of excavation as a process and how it might intersect with arts practice free of the need to find out anything. At the same time, whatever I did would discover something, even if it did not relate directly to Roger’s initial thoughts.

I was also interested in including elements from the environment that might be overlooked in conventional archaeological excavation. On the first day, one of pouring rain, I began by clearing vegetation off the site. I deliberately gathered and photographed some examples of the plants I removed. 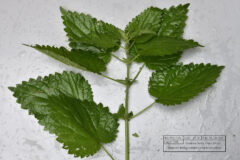 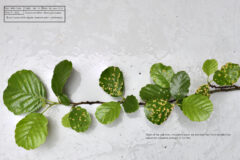 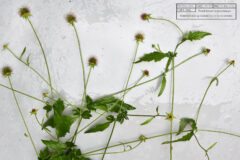 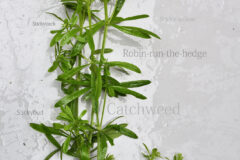 This ground cover, the living environment above ground, became context 1 [C1]. I identified five different plants and amongst these was an invasive species that plagues the waterways in this region.

Himalayan Balsam clogs up rivers and streams, dominating and blocking out other species. As it dies back completely over winter, it leaves the banks of waterways bare, leading to erosion. These negative impacts are why the species has been designated as an invasive species. Introduced in the early nineteenth century, like other invasive species, its presence and impact could be described as a result of globalisation, or a kind of reverse colonialism as these plants were brought back to the UK from what are now former British colonies as ornamental garden plants. Further information can be found on the Welsh government website and to quote from the site “it is an offence to plant or cause this species to grow in the wild”. Roger spends much of his time each year trying to eradicate this, but each year, seeds are washed downstream from up the valley.

This inclusion of ecology in an excavation could be used in other archaeological community and/or research projects, where there would be a possibility that comparisons could be made between present flora and fauna and evidence gained from paleo-ecological materials sampled during excavation. One site where this kind of comparison became clear to me on what was actually a road construction scheme, the N8 Fermoy to Mitchelstown project in Co. Cork in the early 2000’s. The site, Ballinglanna North 3, had the remains of two early Neolithic houses dated to c. 37000 b.c.. On one visit, an excavator was finding charred hazel nut shells in a foundation trench of a Neolithic house. I photographed these on site and proceeded to investigate the surrounding landscape. A few hundred metres from the house there was a small copse of hazel where I found shells scattered on the ground. It would be an exaggeration to suggest a continuity of this woodland for over five thousand years, but the presence of this native species suggests a connection over time, bringing the past into the present. More can be found in the site report here.

As the excavation progressed I continued to include ecological elements in the project including a weevil species and a smooth newt that crawled into the trench probably overnight.

I carefully removed the newt and placed it somewhere safe. It was quite possibly on its way to the millpond to breed.

I proceeded to start digging, using standard tools of the archaeologist, mattock, shovel and, of course, a trowel. The trench was roughly 1.40 m by 1 m, up against the breeze block wall. Each soil type was identified and recorded as I dug and any finds retrieved and placed in on the wall and in trays left available for passers by to look through.

As I excavated I found myself wondering what it was I was doing and how to proceed. This was partly due to the continuing wet conditions but often I found an intuitive auto-pilot clicking in as my experience in archaeology seemed to take over. It was not easy to to break out of this mindset and decide to deviate from the standards of archaeological practice to something else. In the end time was the determining factor. I had less than four days to complete the experiment on site. I have realised that in order to resolve this dilemma and to use excavation in a creative way, then two things would be necessary. One would be having the time to step back and contemplate more the process of excavating creatively. To be able to leave it and come back. The second element is a more focussed concept of why and what I was trying to achieve by excavation beyond uncovering the past. This could be useful if the correct context could be found. It is certainly linked to contemporary archaeological practice, dealing with the present and the implications of the recent past in the present. It would also be an aesthetic consideration around the creation of negative space, a kind of sculptural un-making by removal, or the carving of land.

This excavation dealt with materials laid down probably in the 20th century, with residual finds from the 19th century. In archaeological terms all I found was evidence of the building of the breeze block wall, a dump from a fireplace [C3] and silting from the nearby stream [C4-C6]. I never reached that goal of archaeology, to find “natural” below culturally deposited or disturbed layers, thereby creating a chronology of cultural and natural activity on the site. It is entirely possible that remains of the mill outhouse were there beneath my feet as I dug.

In the end I decided to make further divisions in the trench, excavating smaller tests in two opposite corners. I was following the grid of cartography and creating blocks of negative space down into the landscape. This use of a grid was also employed in mapping the excavation, drawing scale plans using archaeological conventions and perspective drawings.

Two drawings were combined with photographs in post excavation;

In the above image, artefacts are marked with the following abbreviations;

Most objects I found were retrieved except these lumps of tarmac, probably thrown over the wall when the adjacent lane was re-surfaced. Some artefacts were left in the trench as can be seen above in the post-excavation plan. The trench was left open for anyone who looks over the wall to see and for the elements to reclaim. What I did retrieve were cleaned by Penny Johnston and catalogued.

I collected anything that I found interesting, not just artefacts, but also things like snail shells and the plants in [C 1]. Ceramics dominated, but there was also glass, plastic, metal and butchered bone. Back in my studio I made the following small sculptures from the contexts;

This short experiment in hybridising art and the craft of archaeology was not intended to result in any finished art works or archaeological results. It was, though, an investigation of the process of hybridising two methodologies. A process in which the aims and intuitions of both disciplines occasionally worked together in a kind of serious play, allowing ideas thoughts and processes a freedom that are not usually available to the archaeologist in particular. The methods of archaeology were feeding arts practice, perhaps most productively when something outside of conventional archaeological practice was undertaken, such as considering the flora and fauna presently on site, or making sculptures out of the finds (pieces made for photographing as archaeological artefacts). This process was not always smooth, as I was often wondering how to proceed, how to subvert the excavation process, and when to follow my archaeological intuition, loosing myself in the excavation process as an embodied strenuous and crafted activity, or when to change direction and consider aesthetics around the making and un-making involved in excavation.

It was certainly a pleasurable experience, if perplexing at times.

A very big thank you to both Roger Lougher and Mari Beynon Owen for facilitating this experiment, conceiving and hosting the art camp, and welcoming us to Melin Glonc.