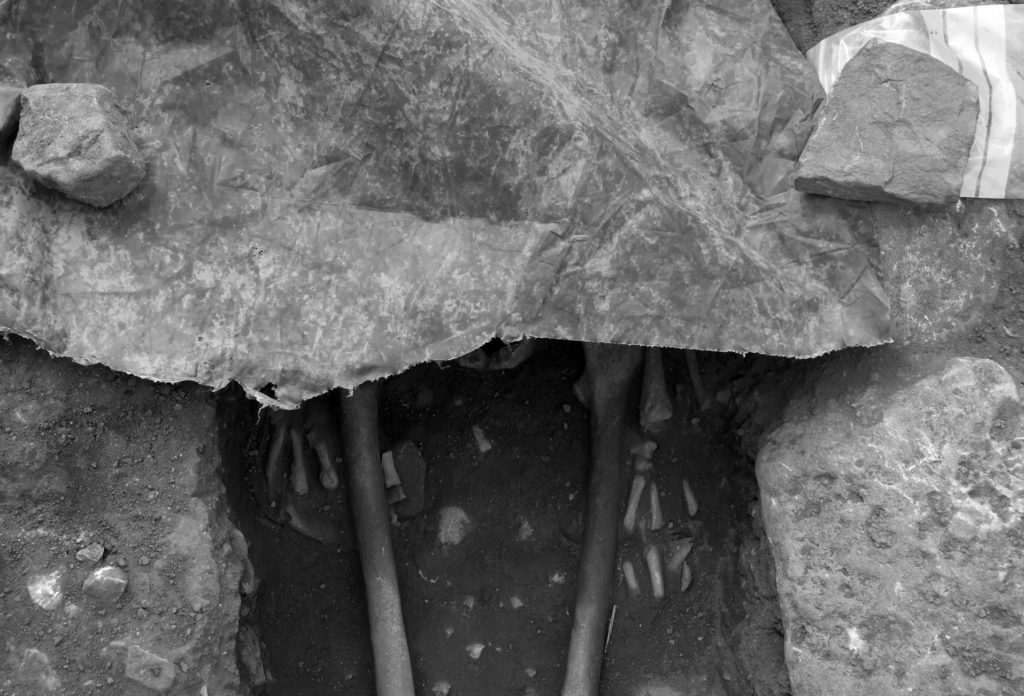 Remains is a collective of works that investigate the issues around the exumation of human remains in the context of the archaeology and the museum. 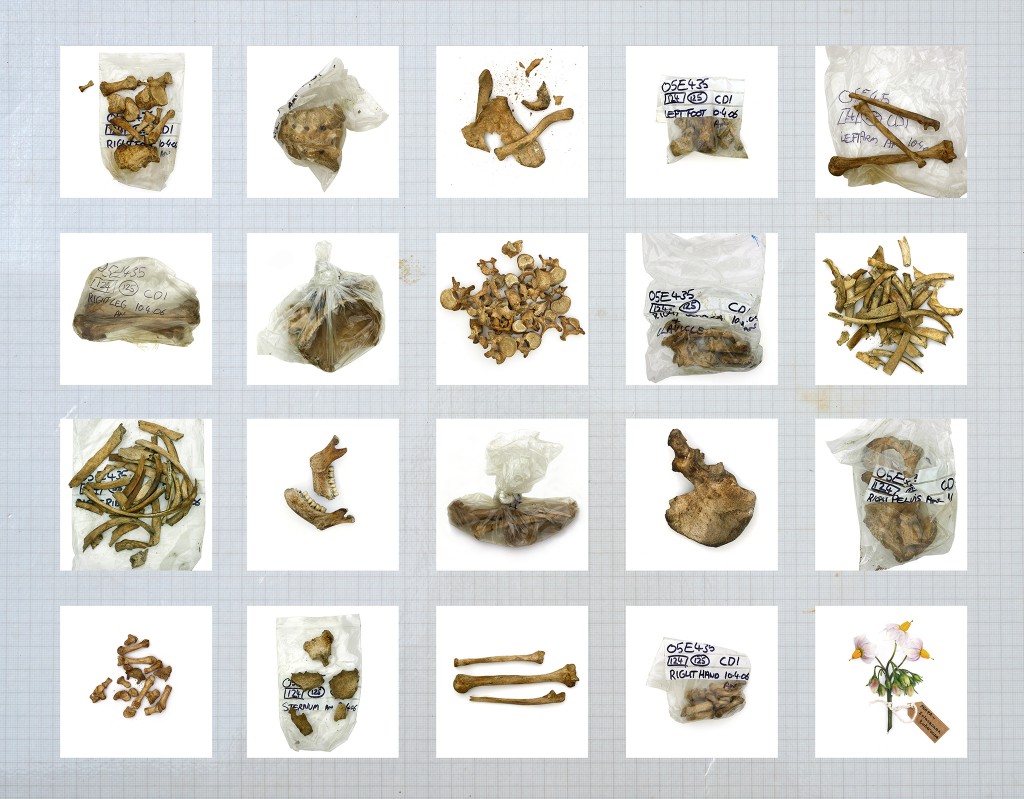 Portrait in nineteen bags, part of this research, is a conceptual artwork that investigates the representation of human remains in science and the museum. It is a single artwork made up of twenty photographs arranged in a grid. There are three versions, one, above, is designed for screen viewing only, whilst version 1 is a large gallery piece with each photograph in a box frame and arranged in a grid on the wall, and the third piece (version 2) has each image mounted on an archaeological planning board (A1 in size). 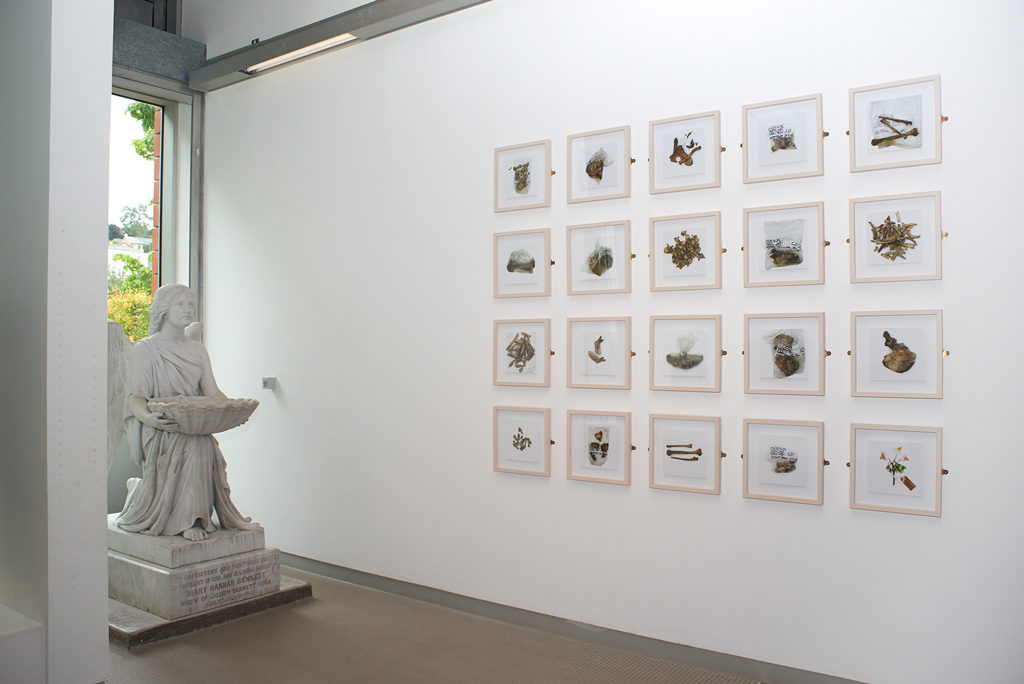 Version 1 of Portrait in Nineteen Bags in Cork Museum 2015 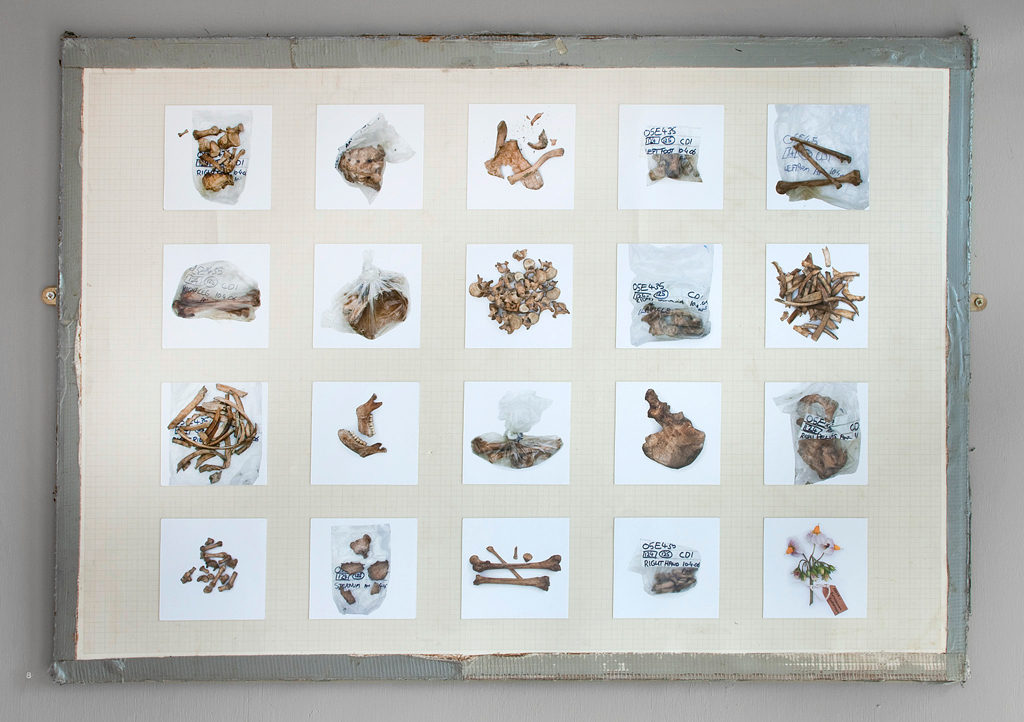 Version 2, Portrait in Nineteen Bags on a planning board exhibited in Manifest a group exhibition in Kinsale art festival 2010 at the Kinsale pottery and arts centre. This piece is now in a collection at Midleton College, Co. Cork.

Nineteen bags is a reference to the division made by archaeologists  of the human body during the process of excavating articulated human skeletal remains (hence the display of the parts of a disarticulated skeleton, as artefacts in a grid). The twentieth image, on the bottom right, is a potato flower, as in this case the skeleton was from a famine grave excavated from the site of the Kilkenny workhouse in 2006. The person depicted here was a male, who died aged between 25 to 35 years old. Skeletal evidence indicates he was a clay pipe smoker. He died as a result of the Irish famine due to the failure of the potato crop in the 1840’s. This is all that is known about the individual discerned by analysis of his remains and the situation of his exhumation. 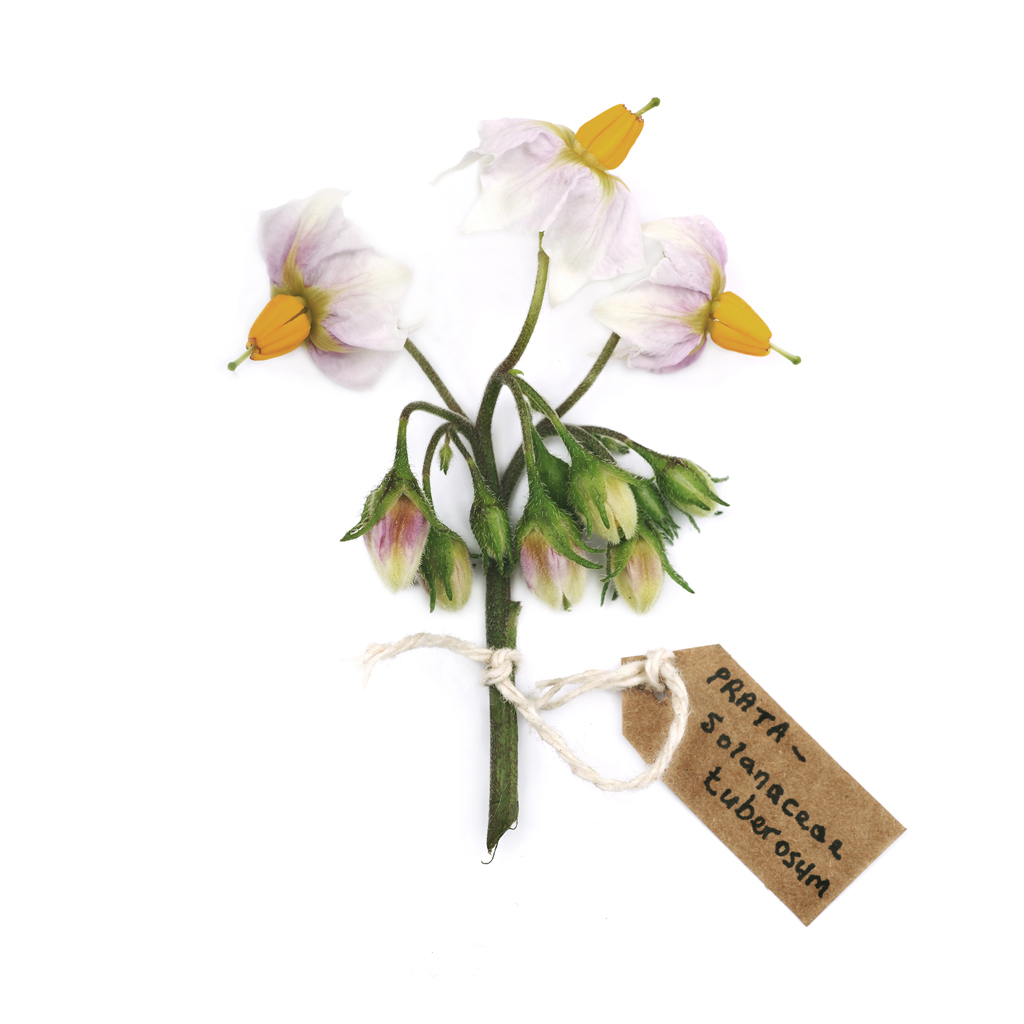 The following is the oesteologist’s report on the remians; 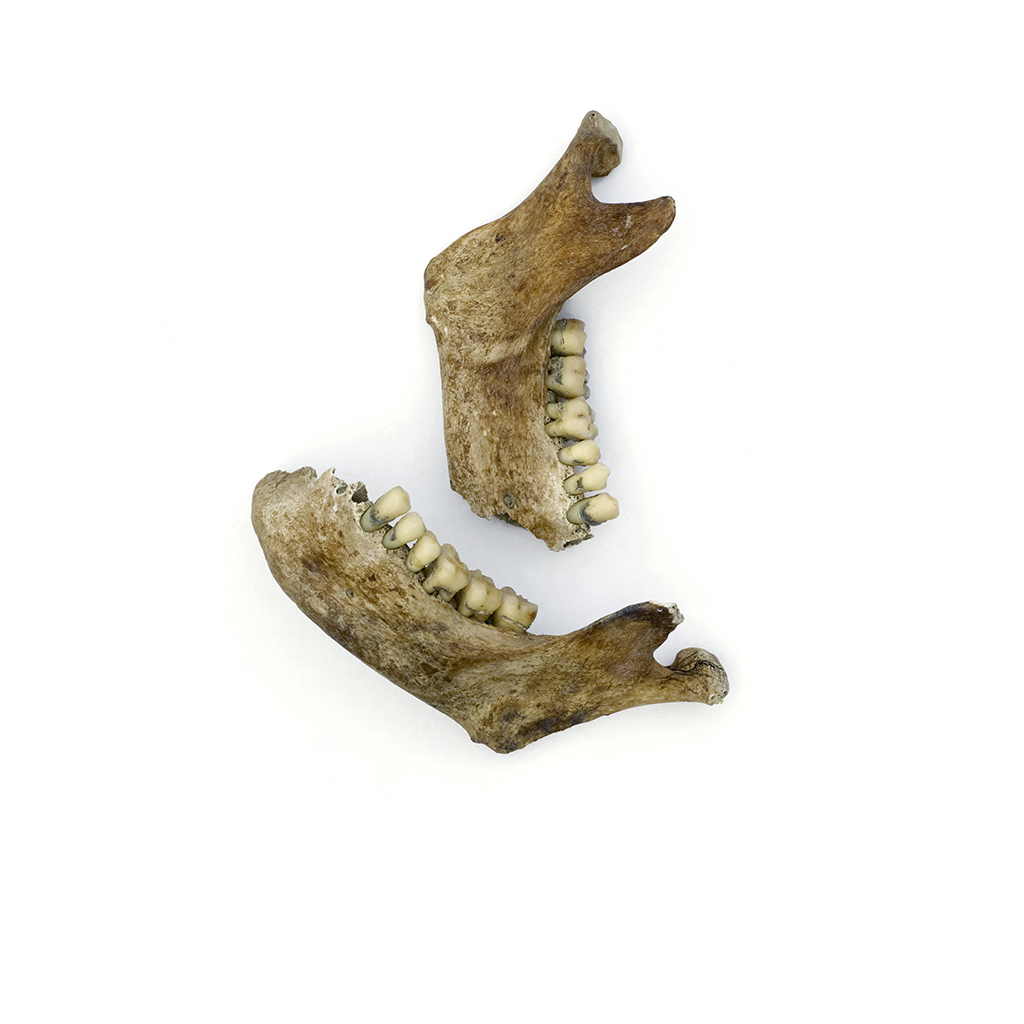 This work was made in 2007. The remains were subsequently re-interred in consecrated ground in 2010 with a religious ceremony. With thanks to Magaret Gowen & Co. Ltd., for allowing access to the remains and to Jonny Geber, the oesteologist who’s report is reproduced above.

Background to the work 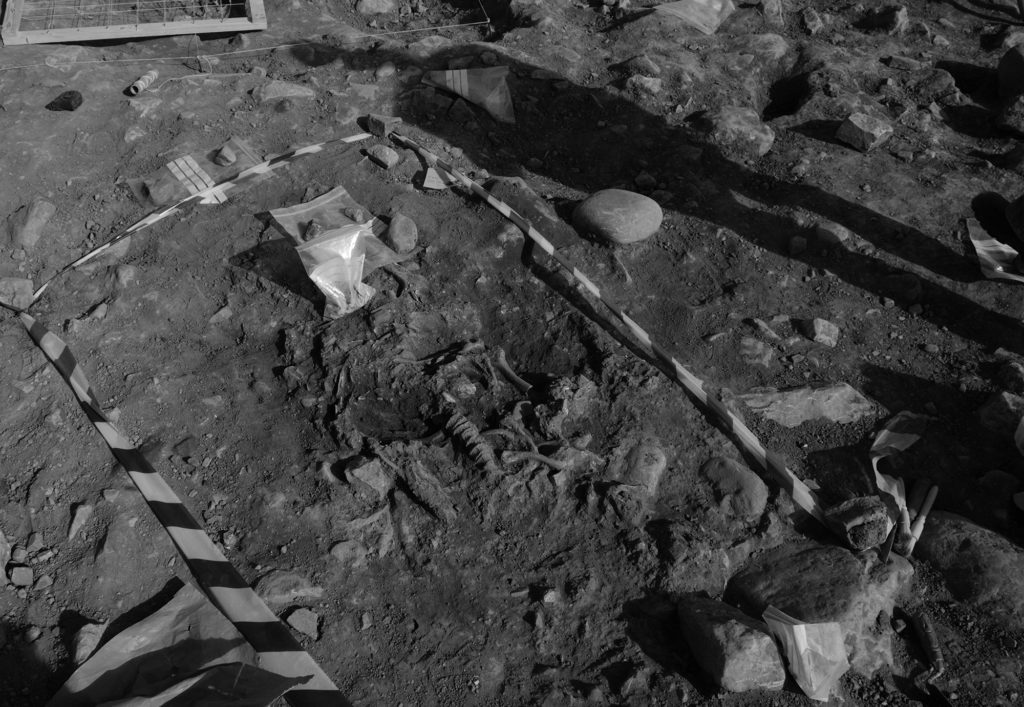 When a grave is excavated or a body discovered by archaeologists the skeleton is gradually revealed for the first time since burial. The surrounding soil  is removed meticulously by hand, the skeleton recorded and then removed from the grave. 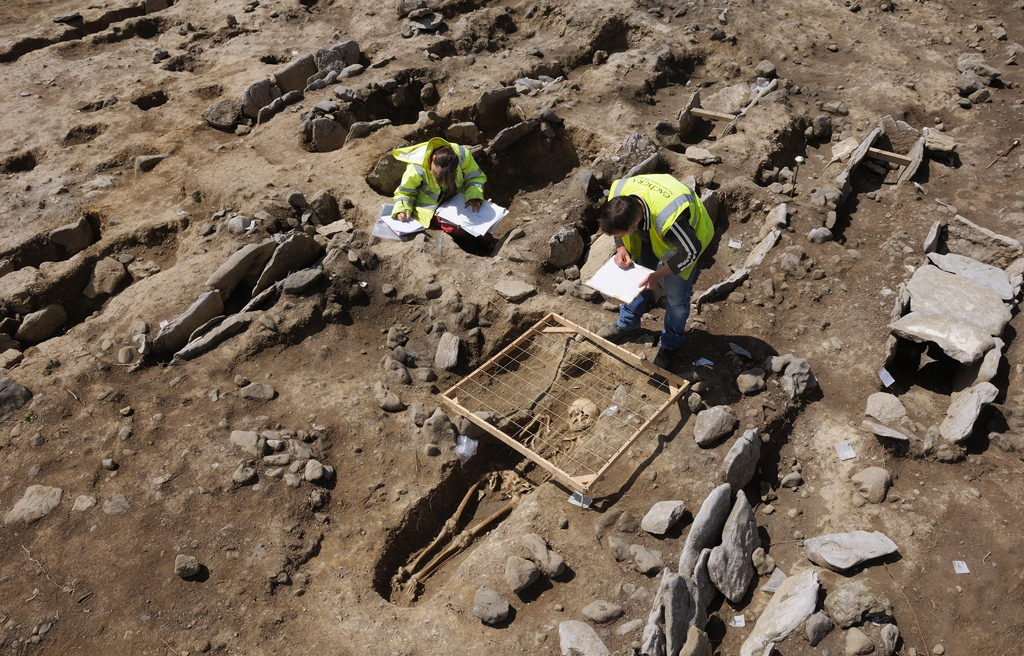 The body is placed in bags according to the parts of the body to facilitate oesteological study in the laboratory. This division and dismemberment of the skeleton results in a total of nineteen bags relating to the legs, hands, skull and so on, of the individual. Each set of bags is placed in a box and removed from site, transported to the laboratory for further analysis. 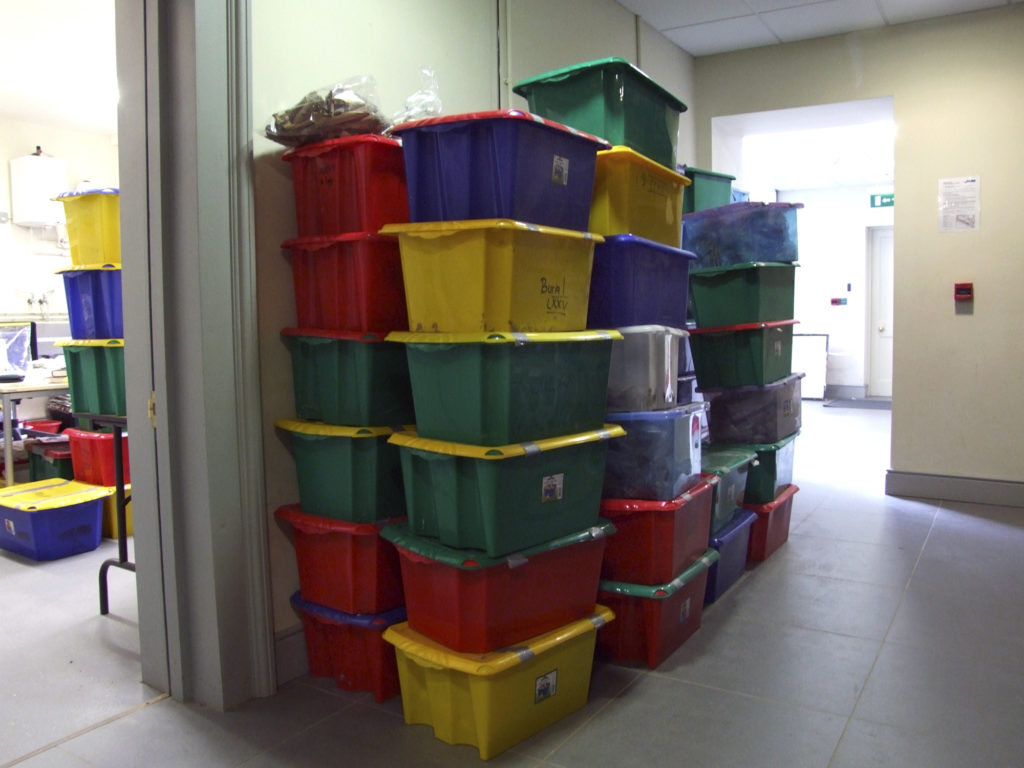 Human Skeletal Remains in boxes in the laboratory

This work is a meditation on this process. The piece Portrait in Nineteen Bags is the result of both experiences of exhumation and a long journey of photographic investigation into how the experience brings up questions that can be interpreted through photography, about the rights and wrongs of representing the dead, as well as their excavation and analysis.

Initially I found that the photography of human skeletal remains during the process of excavation difficult. It was hard not to over-dramatise the subject, creating unwanted references that verged on fictional horror genres.  Rather my interest lay in the process of exhumation and the relationship of the excavator to the person being excavated, whose remains are the only evidence of a life lived in the past. 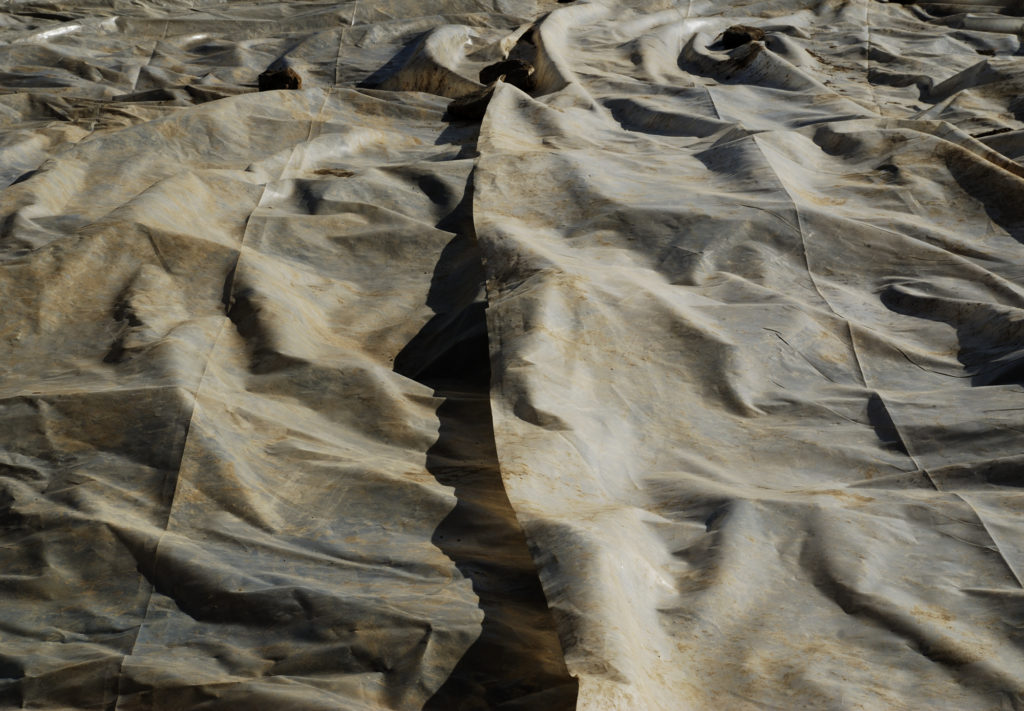 A graveyard site covered after a day’s work.

After much experimentation on site, I decided to move into the laboratory to photograph the bags and the bones themselves. The reason for this was that the body, through excavation and analysis, becomes a cultural artefact, as well as a human being. Each part of the body was photographed at least three times, in the bag, on the bag and without the bag all together.

Once rendered into an artefact the body is subject to empirical analysis. Evidence is gathered from the remains about the individual’s life (see above). The rigour of this process has as a consequence the tendency  to  remove or minimise the potentially disturbing emotional responses that those undertaking the process and those observing it may have to dealing with the dead. The gathering of factual evidence tends to inhibit more imaginative responses that may contradict findings, or make the work of excavation difficult to undertake.

In the course of my work as an archaeologist, I have on numerous occasions excavated human remains, I found it a disturbing experience despite the rigour of process, hence this response. I have wondered and still wonder if archaeological and oesteological empiricism alone are appropriate responses to the exhumation of human remains. This process frequently does not occur in the isolation of archaelogical research, but often to remove the remains from a construction site. This is understandable, as humans have been buried for a long time and grave sites are relatively common, sometimes their locations are initially (prior to excavation) unknown. The information gained from excavating these sites must be balanced, placed within the context of the retrieval of the remains and appropriate treatment given to the remains uncovered on a case by case basis (the individual photographed in nineteen bags was suitably reinterred, see above).